After cold shot, why to gain weight quickly

Core tip: after a cold injection, why get fat quickly

Since the discovery of glucocorticoid in the adrenal cortex in 1927, glucocorticoid has saved countless people's claims for nearly a century, especially in the face of some serious inflammatory reactions. During the period of SARS, glucocorticoid greatly alleviated the inflammation caused by the SARS virus and saved a large number of patients' lives. Similarly, glucocorticoid is still a very good drug for the treatment of allergic diseases, rheumatism, rheumatoid arthritis, acute leukemia, and so on 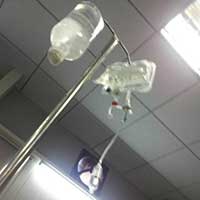 Many parents are too anxious to let their children get better as soon as possible and avoid pain. To meet the needs of parents, some informal medical institutions, especially grass-roots clinics, blindly inject glucocorticoids. Glucocorticoid has a very good anti-inflammatory effect and has a rapid and powerful role in reducing fever, which makes people feel like a needle. But the adverse reactions will come soon.

Many parents reflect that their children gain weight quickly after the injection of cold. In fact, this is usually the use of glucocorticoids. More typical are prednisone, dexamethasone, and so on. But glucocorticoid belongs to the adrenocortical hormone, does not belong to the growth hormone, why can cause obesity?

A large number of studies have confirmed that glucocorticoids can promote adipocyte differentiation, increase triglyceride synthesis, inhibit fat decomposition, promote fat accumulation, and lead to metabolic disorders. It has long been found that glucocorticoid is easy to cause Cushing's syndrome, which is characterized by concentric obesity, insulin resistance, type 2 diabetes, hypertension, hyperlipidemia, and a series of metabolic disorders.

This also reminds us that children with cold and fever should not be too anxious. Normal treatment is OK. They are eager for success. If they use hormones indiscriminately, they will do more harm. However, the above-mentioned glucocorticoid usage in oral and injection, topical glucocorticoid cream, and respiratory corticoid aerosol spray. Generally do not enter the blood, these adverse reactions rarely appear.

After cold shot why to gain weight quickly