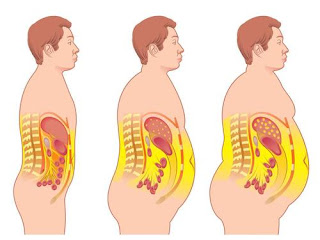 Central obesity can have adverse effects on health. The cardiologist of Hong Kong Hong hospital explained that intra abdominal fat (IAA) is different from subcutaneous fat. It can produce some chemicals to change the following hormones

1. Angiotensin is secreted: it causes vasoconstriction and increases blood pressure.

2. Leptin failure: it is responsible for directing the brain temeritiesto to control the stomach. If it loses normal movement, it will not feel full and then overeat.

In other words, the accumulation of fat in the abdominal cavity will directly affect the rise of blood pressure and cholesterol. After more than 10 or 20 years, these elements will cause pathological changes in the inner wall of blood vessels, and even form a vascular obstruction. Therefore, central obesity can indeed cause heart disease.

A big belly is prone to heart disease

Doctors pointed out that the risk of cardiovascular disease in patients with metabolic syndrome is 3-4 times higher than that in general. If not only two risk factors are met, but all four, the chance of heart disease can be as high as 7-8 times.