Obesity is prone to a variety of diseases

Core tip: obesity is one of the ten chronic diseases identified by who

Obesity is one of the ten chronic diseases identified by who. With the improvement of living standards, there are more and more obese people around. Relevant data show that at present, there are 200 million overweight people and over 90 million obese people in China. The metabolic syndrome, diabetes and cardiovascular diseases caused by overweight and obesity are increasing year by year, which has become one of the main causes of harm to human health and death in today's society. The medical expenses of various diseases caused by obesity have caused heavy social and economic burden. 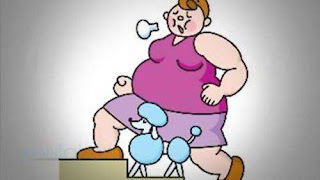 Huang Qiya, chief physician of Qingyuan people's Hospital, said that the international standard is body mass index (BMI). The normal body mass index of women is 21-23, and that of men is 22-24. Those who exceed the normal value but lower than 28 are defined as overweight; those above 28 belong to the category of obesity. This statistical method may have a little error, but it is really the most scientific way to measure whether a person is obese or not.

What harm will obesity cause to the body? In this regard, Huang Qiya made a detailed analysis.

Obesity easily leads to various vascular diseases. In addition to the accumulation of subcutaneous fat in obese people, viscera and blood vessels all over the body are also full of fat, so it is easy to cause a variety of vascular diseases, especially cardiovascular and cerebrovascular diseases which are seriously harmful to health and life. Research data show that the incidence rate of hypertension in obese people is 1.5 to 3 times that of normal persons.

Obesity is easy to induce diabetes. Although it can not be said that obesity is the direct cause of diabetes, its inducing effect on diabetes can not be ignored. Many data confirm that the more obese, the higher the incidence rate of diabetes. At present, in some developed countries, the most common disease caused by obesity is diabetes. About one third of adults with diabetes are obese.

Obesity is easy to cause motor system diseases. Excessive weight gain in obese people is an additional burden on the skeletal and joint motor systems, especially on the spine and lower limbs. Bones, joints and other tissues support excessive weight for a long time, just like carrying extra things every day. As time goes by, it is bound to lead to arthritis, muscle strain or spinal nerve root compression.

Obese people generally do not want to be active, sleepy, easy to fatigue, a little exercise is feeling flustered, shortness of breath, directly leading to the reduction of sexual ability.

Obesity is prone to a variety of diseases